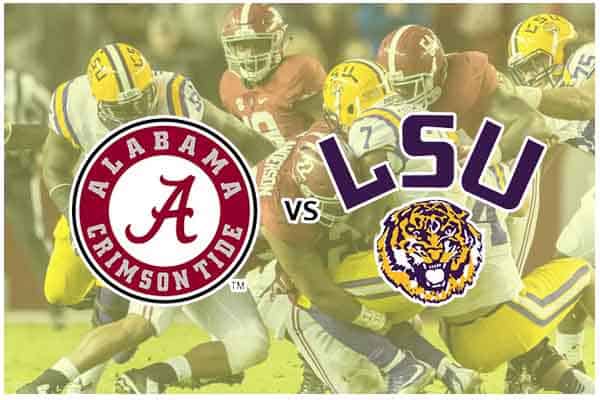 The Tigers will be drowned by a Crimson Tide in Death Valley this Saturday.

That’s according to oddsmakers, at least.

LSU has not been an underdog at Tiger Stadium by this wide of a margin since 1997, which saw sportsbooks set the point spread on the #14 Tigers as a 16.5-point home underdog against the #1 Florida Gators, who were the defending national champions.

The Tigers won 28-21 against the Gators.

And consider this: Since the 21st century began, not a single team ranked in the AP Top-10 has entered the game as a double-digit home underdog – until this Saturday.

Which says a lot about Alabama and how dominant the team has been this season. Many college football historians believe this could potentially be the greatest college football team ever assembled, which is hard to argue.

Coming into the matchup, the Crimson Tide rank in the Top-10 nationwide for both offense and defense, winning each game by an average of 38.2 points – best in the country.

QB Tua Tagovailoa is a huge reason why and has given the Crimson Tide something the team has lacked in the Nick Saban era: A QB that can beat you with his arm.

Tagovailoa has been exceptional this season so far, completing over 70% of his passes while throwing 25 touchdowns in only 8 games. Not to mention that he’s yet to throw an interception, further bolstering his chances of winning the Heisman Trophy this season.

LSU has been rather impressive as well this season with their only loss coming on the road in Gainesville against the Gators, losing narrowly 27-19 on a pick six with under two minutes to play in the game.

However, the Tigers have had arguably the most difficult schedule in the country this season and are the only team in 2018 to defeat three AP Top-10 teams.

The Tigers offense has been shaky at times this season, and it’s their defense, ranked 7th in the country and allowing only 15.1 points on average, that has carried the team for much of the season.

The offense for the Tigers will need to match points with the Crimson Tide, since failing to do will likely lead to a blow-out loss and justify the high point spread against the team.

Both LSU and Alabama have a 5-3 record against the spread this season. The Tigers are undefeated at home this season, but the Crimson Tide are perfect on the road.

With a chance to win the SEC West, take a trip the SEC Championship, and receive an invitation to the College Football Playoff on the line this Saturday, only one team will get out of Death Valley alive between the Tigers and Tide.

Check out this page to learn how to bet on Alabama legally.