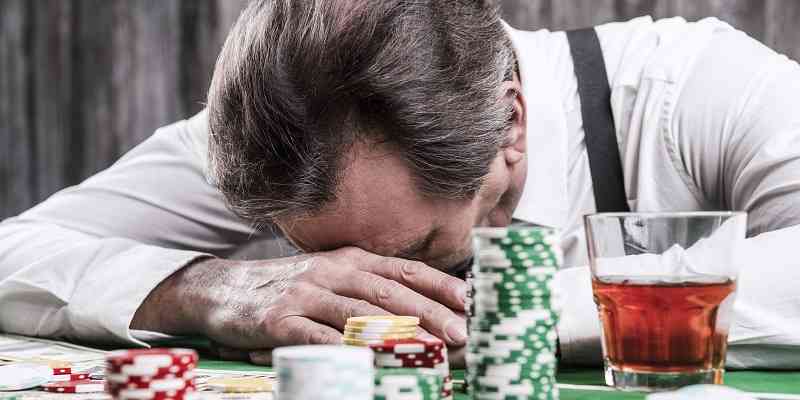 We consider it to be a wonderful pastime, profitable at its best, entertaining at its worst, and exciting no matter what.

That said, we don’t rub your nose in it with unending pleas to our readers warning them about the dangers of problem gambling, gambling addiction, compulsive gambling, or whatever this week’s media-friendly PC characterization du jour happens to be.

Instead, we trust you to gamble responsibly, to never wager more than you can afford to lose, and to not risk your life or freedom chasing the thrills that gambling provides.

In short, we expect you – even at 18 years old – to prioritize your existence in such a way that gambling is a pastime, not a life’s calling.

We expect you to put your financial obligations to self and family first, second, and third.

If you’ve got some cash left over after that, then by all means, hit the slots and felts to your heart’s desire.

That’s why this kind of headline really irks us (and no, we don’t link to cynical propaganda):

First of all, we had no idea it was “Problem Gambling Awareness Month.” We thought it was Women’s History Month. But there’s probably a joke in there about the latter causing the former, so maybe the overlap fits.

At any rate, we had even less of an idea that people were unaware of problem gambling.

Heck, you can’t go to a brick-and-mortar casino or sportsbook anywhere in the world without seeing a parade of signs warning you against gambling addiction, and every domestic betting site has all the requisite logos and hotlines to various help centers like the NCPG and 1-800-GAMBLER.

But more than that, these kinds of ad campaigns are grossly cynical on their best days. “Distasteful” doesn’t even begin to describe them.

William Hill is one of the preeminent European and American bookmakers, having recently launched in the burgeoning American betting market with William Hill US.

But like any big concern, their concern certainly isn’t keeping people away from their services.

On the contrary, they’re using this push to cash in on the goodwill of gullible others to spread their brand name to the people most attracted to gambling in the first place – and thus, those most likely to become problem gamblers.

It’s kind of like all those anti-smoking campaigns that show people smoking in their ads. Psychologically, these brands know exactly the message they’re sending: Smoke. Now.

Frankly, one of the things we like best about legal international betting sites is that they aren’t heavy-handed about gambling addiction awareness.

These sites have small, unobtrusive links at the bottom of their pages, and if you’re so inclined, you can click or tap those to learn more.

Then, you’ll be directed to a series of local non-profits where you can seek further assistance. Plus, all the most reputable sites have self-exclusion mechanisms in place, so it’s easy to cut yourself off if you need to.

And that’s because these sites trust you – a free-thinking adult human being with individual agency – to do the right thing.

They don’t assume you’ll do the opposite and hit you in the face with giant banners and labels telling you to be super duper extra careful doing this thing you’re doing.

Nobody needs that, problem gamblers least of all.

And they certainly don’t need stuff like this (via ESPN, in clearly coincidental tandem with the MSM coverage of William Hill’s not-at-all-self-serving press release):

Judge Cheryl Moss witnessed stories of devastation while overseeing the Nevada Gambling Treatment Diversion Court, beginning with her first case, a grandmother who stole more than $500,000 from a Las Vegas plumbing business to fuel an addiction to video poker and slot machines.

In 2013, Jerry Nann Meador, who had never even had a speeding ticket, pleaded guilty to felony theft and was sentenced to four to 10 years in prison. She spent 2½ years in a women’s correctional center before being released and accepted into the state’s gambling treatment court.

See that? This poor grandma – this law-abiding, sweet old pillar of her community who never ever harmed a fly – stole half a million dollars from a plumbing company so she could play slot machines.

But alas, the “compassionate” judge – showing no compassion to the actual victims – allows these disgusting criminals to ruin peoples’ livelihoods and get a comparative slap on the wrist because…problem gambling is a “disease.”

Thus, the problem gambler doesn’t ever have to be responsible for his or her own actions. It isn’t their fault. It’s gambling’s fault.

And that is utterly unacceptable.

Every single criminal on the face of the earth, through the whole of human history, commits crimes due to various extenuating circumstances.

What those extenuating circumstances might be, take your pick.

But is gambling such an extenuating circumstance – such an existential imperative – that it trumps the rule of law and requires endless compassion, attention, and understanding (not to mention literal funding) from those of us adult enough to actually adult?

Is gambling addiction a good enough reason to ruin the lives of those around you with impunity?

No, it isn’t. Anyone claiming otherwise is just trying to make a dollar off of other people’s troubles.

Look, if you’re a gambling addict, you should probably get help. That, we agree with. And help is so easy to find that we don’t need to bludgeon you over the head with any virtue-signaling about how much we care.

But let’s be real: The vast majority gamblers – whether they play at retail casinos or online US-friendly sportsbooks or anywhere else – do so responsibly.

Further, they take responsibility for their actions when they fail to meet that standard.

See, responsible gambling isn’t just about playing within your means. It’s also about owning it when you’re stretched to your limit. It’s about taking responsibility.

And that’s easier than ever today.

Long gone are the days of casinos extending credit to customers who can’t afford it.

While that may happen in pockets, the industry is so heavily regulated that bad actors can’t take advantage of gambling addicts on a large scale like they used to.

Most retail casinos make you buy your chips up-front, and most retail sportsbooks make you pay for your wagers when you place them.

Your kneecaps are safe.

But what about online? With more access comes more addiction, right?

Ironically, the sheer convenience of online gambling hasn’t made addiction worse. On the contrary, legal offshore betting sites have been de facto pioneers of responsible gambling since the late 1990s, as they’ve never been able to extend credit to their members.

This is logistically sensible, since a US-facing sportsbook or online slots site located in Costa Rica or Curacao isn’t in a position to come collecting stateside.

But it also ensures that players can’t bury themselves in gambling debt to begin with.

Yes, players can still deposit more than they can rationally afford to given their own personal finances, but without the allure of that blank check, the addiction issue has been mitigated organically, all without heavy-handed nonsense like these current ad campaigns.

Then why is their name and logo at the top of the banner?

We know what they’re doing, and we are unimpressed.

So for International Problem and Compulsive Addiction Gambling Disorder Disease Awareness Week Month 2021, we’ll leave you with this:

Never risk more than you can afford to lose, and if you do, don’t make it worse. Log out, log off, and get help.

Nobody can right the ship but you.