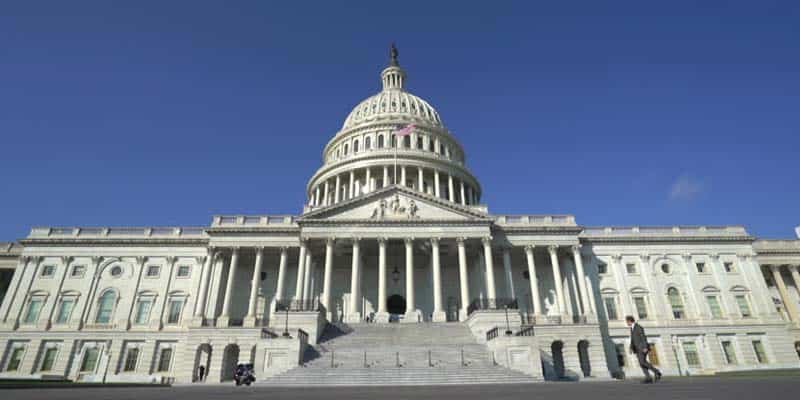 As sports betting continues to be legalized across the country, one governing body is finally taking notice.

That governing body’s name? The Federal government of the United States.

U.S. Senators Mitt Romney of Utah and Chuck Schumer of New York have reportedly begun discussing a federal sports betting bill that would create a framework of regulations and guidelines for the states that accept wagers on sports.

Although the legislation hasn’t been officially introduced in Congress, the bill is said to mirror what Schumer and U.S. Senator Orrin Hatch proposed in late 2018, before he retired and Romney took his seat.

The Sports Wagering Market Integrity Act of 2018—filed as S.3793—didn’t go anywhere, like much of the legislation in the past decade, when it was first introduced in December.

If Romney’s and Schumer’s federal framework does indeed match the previous bill, here’s what will be included in the legislation:

Since the U.S. Supreme Court’s decision to overturn the Professional and Amateur Sports Protection Act of 1992 (PASPA) in May 2018, a total of 13 states now offer regulated sportsbooks in their jurisdictions, and it’s expected that at least half of all states will offer at least one form of legal sports betting before the end of 2020.

As more and more U.S. sportsbooks launch, there has been increased pressure applied to politicians in Washington D.C.—the nation’s capital will also soon offer sports betting—to act and establish a minimum set of standards for the states to follow now that the sports betting prohibition has ended.

Among the group leading the charge for a federal framework is none other than the National Collegiate Athletic Association (NCAA), who suffered not one, but two embarrassing defeats when the ban was lifted last year.

With states granted the right to legalize and allow sports betting—and the U.S. Supreme Court rejecting the NCAA’s appeal to be given special exemption—the governing body for college sporting events now is pushing for federal lawmakers to take action.

Even though the NCAA would love it if no one in the U.S. was legally allowed to gamble real money on college games or athletes, what it fails to realize is that its own defeat in the highest court in the land was due in large part because of exclusivity.

Nevada controlled a monopoly in the U.S. market for decades due to being given exemption from PASPA because of its reliance on tax revenue from Las Vegas casinos and sportsbooks.

States, most notably New Jersey who led the charge, argued it was unconstitutional for one state to be given special treatment when it came to accessibility to the market, and the U.S. Supreme Court agreed.

Now, the NCAA could potentially lobby federal politicians in the hopes of carving out an exemption so betting on college sports is banned nationwide—a move that will certainly be challenged, especially since the Judicial Branch has historically been against exclusivity and anti-competitive practices.

To date, no state with legalized sports betting has included any such exemption. At most, a ban on games involving in-state colleges is implemented, and even that’s likely to disappear entirely in the coming years.

This is especially true as the South—which houses several powerhouse Southeastern Conference (SEC) football programs—pushes for legalization and seeks revenue from the many passionate SEC fans that would most certainly take advantage of a state-regulated sportsbook that offer betting lines and odds on their hometown team.

The Romney-Schumer will face longshot odds if it ever does see the light of day, and the NCAA will face virtually no chance of getting college sports betting banned—try as it may.

Sports betting and gambling in the United States are quickly becoming more accepted by the American people and politicians at all levels of government since its seen as a good way for states to generate tax revenue for their education and infrastructure budgets—similar to what the state lotteries have done for years.

But with the U.S. government looking to establish new laws on sports betting for the states, one can’t help but feel a bit uneasy about feds having oversight over nationwide regulations.

After all, it was the politicians on Capitol Hill who passed the now-unconstitutional PASPA in the first place and later had it signed into law by then-President George H.W. Bush.

And in the end, that didn’t turn out so well, now did it?