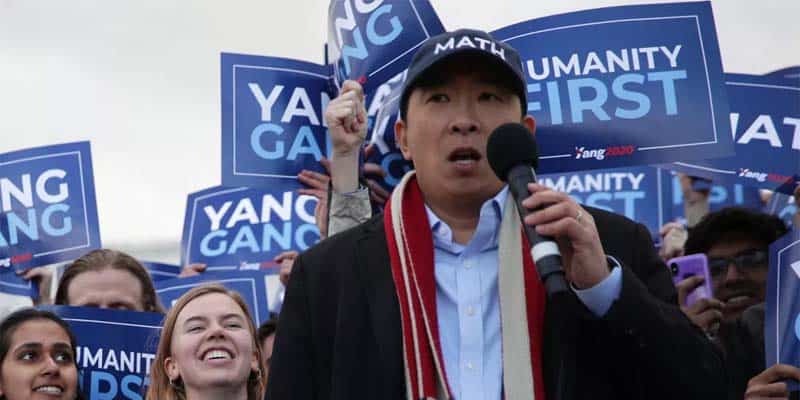 One Presidential hopeful has pushed his chips forward and wants to go all-in when it comes to legal online poker in the United States.

New York entrepreneur Andrew Yang, a contender for the 2020 Democratic nomination,  recently took to Twitter to voice his support for the nationwide legalization of online poker.

The Democrat, who hopes to be the one to face President Donald Trump in the general election, highlighted the potential dangers of state-by-state laws pushing players to unregulated sites overseas.

Additionally, Yang pointed out the added benefit of how federally legalized online poker would generate significant tax revenue for the United States, where it currently goes to other countries.

“Online poker is legal in 4 states. The state-by-state rules are variable and push many players to offshore sites. We should clarify the rules and make it legal in all 50 states. US players and companies would benefit and new tax revenues could be used to mitigate addiction,” Yang said in a tweet earlier this week.

Online poker is legal in 4 states. The state-by-state rules are variable and push many players to offshore sites. We should clarify the rules and make it legal in all 50 states. US players and companies would benefit and new tax revenues could be used to mitigate addiction.

Interestingly, Yang is the first presidential candidate of note from either the Democratic Party or Republican Party to publicly express his support for legalizing online poker—or any form of legal online gambling—at the federal level.

Most candidates who’ve supported legalizing online poker, such as 2008 and 2012 Republican presidential candidate Ron Paul, have stated it should be left to the states—a position that Yang says actually hurts more than it helps.

Joe Ingram, as known as “Chicago Joey,” is one of the world’s most well-known professional poker players and hosts the podcast “Poker Life.” After Yang announced his support, Ingram reached out to the Democratic candidate on Twitter.

“Dear @AndrewYang, I invite you on my show to expand on your tweet related to the online poker in the US. The situation for American players is in need of help. Players are being taken advantage of w/ few safeguards in place.”

Yang, who’s always open to discussing pretty much any topic, was quick to respond, “Thanks Joey. Would love to sit down.”

Thanks Joey. Would love to sit down. 👍

Whether Yang can garner enough support to win the Democratic nomination and the White House remains to be seen.

But despite being a longshot that no one knew anything about at the beginning of the year, the entrepreneur has begun to become a household name throughout 2019 with the “Freedom Dividend”—his primary policy that would give all American adults $1,000 a month, as known as a “universal basic income.” The policy is meant to give the working class a fighting chance as automation continues to claim potentially millions of jobs over the next decade.

According to online sportsbooks, Yang currently has +1400 (14/1) odds of becoming the next President of the United States. Only President Donald Trump, Elizabeth Warren, Joe Biden, and Bernie Sanders have better odds winning the 2020 election at this point in the race.

Odds to Win the 2020 Presidential Election