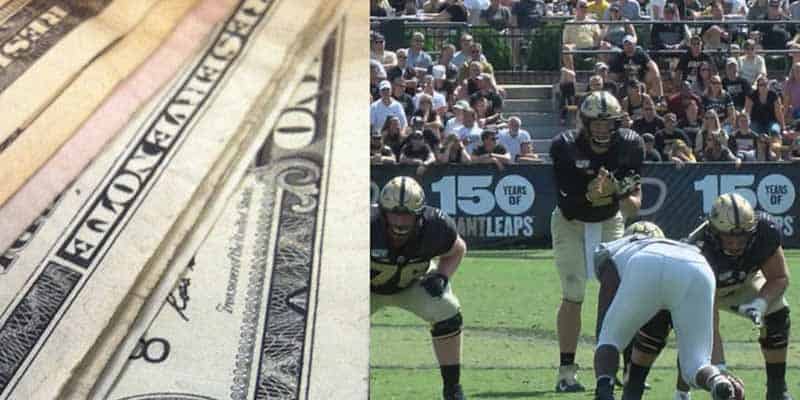 Indiana jumped on the sports betting hype train at the beginning of September, becoming the 13th state to offer sportsbooks as a result.

Now,  Purdue University is looking to derail that train.

The Purdue University Board of Trustees approved the adoption of a new “sports wagering policy” on Thursday, October 10th, that “bans faculty, staff and non-athlete students across the university system from gambling on sporting events involving any Purdue teams, coaches or student-athletes.

That’s right: If you’re a school employee or a student at the university, then don’t even think about placing real-money wagers on the college games involving the Boilermakers—or else.

What is the “or else,” you ask? “Faculty and staff violators of the rule would face discipline up to and including termination.”

In a nutshell, if a Purdue employee is found betting on Boilermaker games, he or she will be fired immediately, and any student that does the same will be kicked out of the school.

The policy also applies to all forms of wagering in Indiana, regardless of whether the bets are accepted in-person, online, or via mobile apps.

Approving a policy that bans student-athletes and coaches from betting isn’t necessary since the NCAA rules already prohibit wagering for people directly involved with a collegiate contest, including certain university officials.

One thing is noticeably absent when reading the university’s press release for the new policy: A reason for the ban.

The only logical conclusion would be that Purdue wants to dissuade faculty members and students from potentially influencing student-athletes and coaches to make in-game decisions that can benefit their at-risk wager.

But that’s a whole lot of if, buts, candy, and nuts.

And as Sports Illustrated points out, this policy not only faces logistical obstacles but will likely face serious legal challenges if it’s ever actually implemented.

To start, how will Purdue ban employees and students who bet online and on mobile apps? They could monitor the Internet activity those individuals, but that’s only going to apply when they’re on the school’s network.

Even still, there’s this thing called a virtual private network (VPN) that essentially makes anyone, anywhere anonymous when online, so good luck trying to track the people placing bets at legal sportsbooks.

And if it couldn’t get any more ridiculous, the policy doesn’t prohibit all sports betting—just wagering on Purdue’s games.

So now, we enter the realm of wanting to spy on a sportsbook, and the odds of operators turning over their records to a university are slim to none. As the SI article points out: “Those operators have no legal obligation to turn over records. Similarly, Purdue has no subpoena power or a credible legal argument to require that private companies to turn customer files.”

To go one step further, Purdue “can’t require students—or faculty or staff—to turn over their personal phones or computers for inspection” because the university doesn’t have the legal authority to do so.

And things get even more complicated for the West Lafayette-based public university, with the keyword there being “public.”

Sports betting could be considered a form a “free speech” and expression since he or she would be endorsing a particular outcome with money, similar to a campaign contribution of a politician.

Campus speech codes have not held up in court when a public university is involved since they are required to adhere to the First Amendment. Private institutions are given a bit more leeway in this regard since taxpayer money is not used to fund the university’s programs.

The U.S.  Supreme Court ruled in the 1993 case, U.S. v. Edge Broadcasting, that gambling is not a “constitutionally protected right.”

However, they limited their decision against gambling since it “falls into a category of ‘vice’ activity that could be, and frequently has been, banned altogether.”

Today—in the year 2019—the public perception about gambling and sports betting have shifted, and it’s become a more accepted activity in American life, similar to that of marijuana.

If the university wants to be taken seriously, they will institute a policy that punishes any proven wrongdoing or match-fixing that has substantial evidence attached.

But that’s not what this is at all. It’s a Minority Report-level of policing mixed with 1984, and the Purdue Board of Trustees want you to believe we’ve always been at war with the casinos and sportsbooks.

And whether Purdue likes it or not, Indiana’s sports betting law makes it one of the 13 states that legally allow anyone, age 21 and older, physically located inside the state lines to place real-money in-person, online, and mobile bets on all sporting events, regardless of whether the Boilermakers are involved or not.

And if Purdue University follows through with their ludicrous policy, then you can bet that a former faculty member or student will eventually see them in court.

And the odds won’t be in the Boilermakers’ favor.