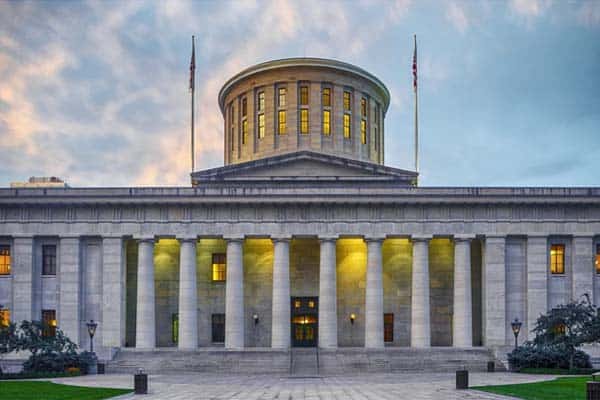 Ohio was projected to finalize a sports betting bill by the end of 2018, however, two introduced bills show there is still a long way to go.

Senate and House Representatives in Ohio have introduced bills to express intent to investigate whether legalizing and regulating sports betting in the state would be sensible. However, the bills are placeholders with no expanded information on potential regulations or statutes regarding legal sports betting. These bills will need to outline key factors regarding minimum age to wager, sports betting state tax rates, and the allocation of those funds.

Republican state Senator John Eklund introduced SB 316 while state Representative David Greenspan produced an equally bare bill known as HB 714 to the house floor. While the two bills have been introduced, only one may become law which will require substantial effort and collaboration between the state’s Senate and House members. Once a cohesive bill is produced it will be reviewed by the general assembly for voting.

However, Ohio’s Governor John Kasich has expressed his disapproval concerning expanded gambling in the state, particularly with sports gambling. In addition, Ohio’s Senate President shares the same distaste for gambling as the Governor and has said he would vote against any bills to expand such. Ohio’s state constitution prohibits gambling except under specific circumstances as determined by Ohio voters.

This may lead to an amendment to the state’s constitution or a substitute bill. Meaning legislators could possibly not have the authorization to legally permit sports betting without moving forward with either of these options. The legality and legitimacy of this will be further investigated once an assigned committee convenes after the November midterm elections.

A growing number of states have legalized sports gambling. At the time of this writing five states have active sportsbooks and have been monetarily successful; Ohio officials are currently seeking reports on the potential effects of legal sports gambling within their state. One report shows an estimated 1 billion dollars earned in gross tax revenue after Ohio’s first year of sports betting legalization and operation.

However, this number does not impress the Senate President who believes the numbers shown in the report are “probably exaggerated”. Current issues facing the state and potential sports gambling partners concern the state’s current high tax rate for casinos. Ohio’s casino table games gross revenue tax rate stands at 33% and operators are worried this high rate will be replicated and applied to sports betting operations.

Internal conflict regarding the expansion of gambling in Ohio plus additional concerns not answered by incomplete details within the two sponsored legal sports betting bills will most certainly push back the finalization of an Ohio sports betting law. Assumptions can be made that by 2019 sessions, either bill would contain more robust information which would help determine its probability of becoming a new Ohio law.