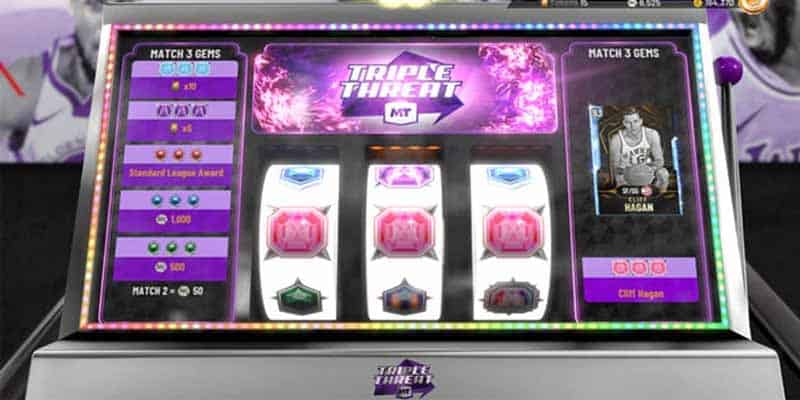 NBA 2K20 has just raised the stakes on what should be classified as gambling.

The latest installment of the world’s most popular basketball video game released a trailer for its “MyTeam” mode this week, and it’s filled to the brim with gambling machines.

Slot machines, pachinko, and prize wheels are on full display as NBA 2K20 becomes the latest release to challenge lawmakers and regulators on what is and is not classified as gambling in the United States.

And this isn’t the first time Take-Two Interactive, the parent company of 2K games, has put gambling in its games. Rockstar’s Grand Theft Auto Online put a literal casino in its game, forcing over 50 countries to ban the feature.

MyTeam was first introduced in NBA 2K13 and is an online mode that allows you to compete teams assembled by other real-life players. Essentially, it’s fantasy basketball, but there’s one key difference: You can pay real money for a chance to make your team better.

“Chance” being the keyword there since the mode doesn’t allow you to purchase exactly what you want. Instead, randomized cards packs—often called “loot boxes” in other video games—are drip-fed to a gamer by completing challenges and other goals in-game.

There’s no guarantee you’ll get the players you want.

Although, console gaming giants Nintendo, Sony, and Microsoft came together earlier this month to force game companies to disclose the odds of their loot box-driven, pay-to-win game modes that are fueled by microtransaction purchases. The drop rate for card packs isn’t required to be disclosed until the game is officially released.

The tired argument against loot boxes being considered gambling centers around the publishers decreeing that it’s both “optional” and has no “payout”—therefore, it can’t be considered “gambling.”

It’s also optional to gamble online in the United States, but that doesn’t mean there shouldn’t be any regulations or age restrictions to help to combat the issue of problem gambling.

And age is the big one.

In case you missed it, the PEGI rating—the Pan European Game Information is an age-appropriate rating system used in the EU, similar to the ESRB in America—at the beginning of the NBA 2K20 MyTeam trailer indicates that its content is appropriate for anyone age three years old and up.

That’s right: The EU game rating board believes NBA 2K20, a game that features a literal slot machine, ball drops, and spinning wheels with prizes, is an appropriate title for a toddler.

And just because a game won’t give you a “payout”—allowing you to cash out winnings like a casino or sportsbook—doesn’t mean that it isn’t gambling.

In fact, because it’s all sunk cost, and there’s no chance to see a monetary return on investment, a case could be made that loot boxes are worse than even the darkest days of gambling in the Al Capone era.

The latest NBA 2K20 trailer demonstrates the Triple-A video game industry’s lack of concern for gambling’s potential for addiction or the progress of the regulated industry in the U.S. and international markets have made in recent decades.

Fortunately, the backlash from gamers has been a driving force in getting lawmakers in Washington D.C. to take a closer look at the issue, and a bill has been introduced in the U.S. Senate to heavily regulate games that choose to have loot boxes.

It’s only a matter of time before the game industry’s cash cow is cooked, and you can bet that it’ll come sooner rather than later.