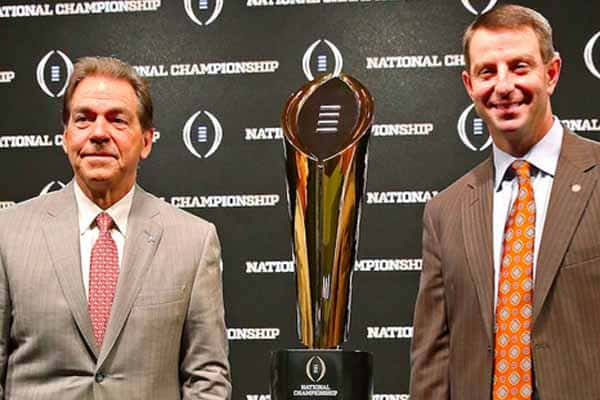 Whether you’re a diehard college football fan or an alien from another planet, here is everything you know before tonight’s national championship game.

Who is playing in the 2019 CFP National Championship?

The No. 1 Alabama Crimson Tide and the No. 2 Clemson Tigers will play tonight in the title game and are the only teams remaining with a chance to win the title.

Who is favored in the spread tonight?

Alabama is currently listed as a 6-point favorite against Clemson at Bovada after opening earlier in the week as a 6.5-point favorite. You can view the current betting line here.

How can I bet on the national championship?

What other odds for the national championship can I bet on?

There are dozens of odds and prop bets for the national championship tonight. Everything from team scoring to player stats can be bet on. The complete list of betting lines can be found here.

How did Alabama and Clemson get in the title game?

After both teams finished the regular season by winning their conference championship and with identical 13-0 records, they were picked by the College Football Playoff selection committee as the first and second seed.

On Dec. 29, both teams won their semifinal games to earn a trip to the title game. No. 2 Clemson won 30-3 over No. 3 Notre Dame in the Cotton Bowl matchup, and later that evening, No. 1 Alabama defeated No. 4 Oklahoma by a score of 45-34 in the Orange Bowl game.

What time does the game come on?

Where can I watch or stream the national championship?

Below are all the places you can watch or stream the 2019 College Football Playoff National Championship:

Where is the matchup being played?

The national title game is being held at Levi’s Stadium in Santa Clara, California.

Who will win between Alabama and Clemson?

It’s a tough call, and most projection models give Alabama a 51% chance to win and Clemson a 49% chance to win. The models believe the game will be a lot closer than what the spread is set at, but Alabama gets the slightest of advantages.

Who is favored to win the 2020 CFP National Championship?

We will find out as soon as the game is over since that’s when the sportsbooks put out the odds for next season. But our bet is on Alabama… again – shocking, right?