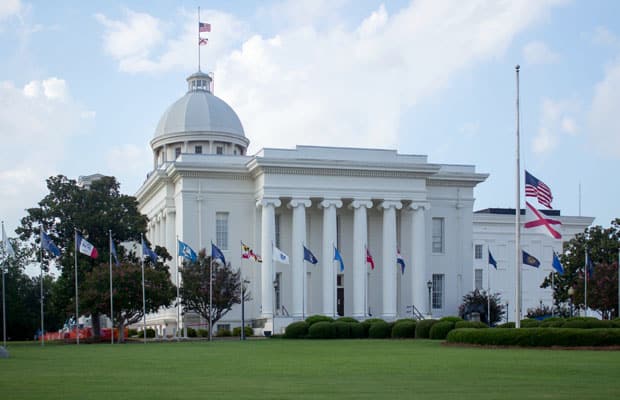 Alabama becomes the latest state to legalize Daily Fantasy Sports by passing a bill through the state legislature. This marks another victory for big name providers like DraftKings and FanDuel who have been fighting an uphill bill across the nation. The biggest argument with DFS is whether it should be considered a game of skill or a game of chance, the former would constitute illegal gambling in the eyes of those who oppose it. Due to how closely DFS betting resembles legal wagering available at offshore Alabama online sportsbooks, many regard the approval of Fantasy Sports contests as hypocritical when US based sports betting is still largely illegal.

Former Alabama Attorney General Luther Strange believed DFS to be illegal gambling and issued cease-and-desist orders to both DraftKings and FanDuel. Lawmakers tried to get a bill through last year that would legalize DFS, but it was unsuccessful. This time around, the bill passed through on a 43-38 vote. At one point, the House declared that the bill wouldn’t ever be up for debate or a straight up-and-down vote, however an issue with an electronic voting machine led to the bill being brought up for consideration yet again.

Debate lasted for nearly two hours and saw a range of testimonies regarding DFS and sports betting. One representative even went so far as to point out the hypocrisy in that Alabama state representatives join the horde of Alabama residents who bet on their local teams, a realization that could prove significant in later cases. Legally sanctioned Alabama online betting has been taking place for several years at offshore destinations, but the new legislation is bringing the concept a little closer to home.

DFS has been met with much disdain since it burst onto the scene, but it is becoming increasingly popular and more states are beginning to legalize it. States that do are able to regulate DFS providers to receive revenue that can be funneled back into the state. For a conservative state like Alabama to legalize DFS is a positive sign going forward and a testament to the momentum the industry is building. The bill still has to pass through the Senate, and there is no telling how that will end up. In the event that it does make it through, DraftKings, FanDuel and other DFS providers will be allowed to offer Alabama residents paid contests. There are already free play services in effect, but these businesses are built on their paid contest offerings and would like to have them in all 50 states if possible.

The fast action between the failed attempt at passing DFS to now shows that legislators are wary of the rising demand for DFS action. Alabama is a football state, and as that one representative pointed out, sports gambling happens anyway. Legalizing DFS is just another way that the state can benefit off something that is already in high demand. Other states will likely take notice of Alabama’s ruling, along with the other states who have legalized DFS, and start pushing legislation of their own.  You can read the official language of the bill in Alabama SB 28.