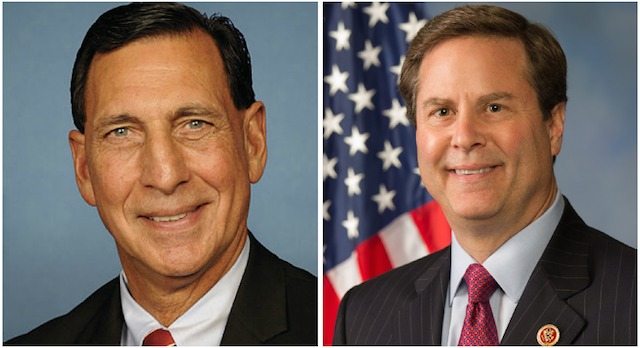 Representatives Frank LoBiondo and Donald Norcross (republican and democrat, respectively) have asked Congress to hold hearings regarding the prospect of legalizing sports betting. Both representatives are out of New Jersey, which is currently in the middle of a legal battle over the same topic with the NFL, NBA, NHL, MLB and NCAA. That particular case is being heard by the Supreme Court later this year. This move appears to be additional insurance in case SCOTUS decides to rule in favor of the plaintiffs.

LoBiondo and Norcross specifically asked the House Judiciary Committee to begin looking over sports wagering in the United States. The sports betting landscape could drastically change pending the outcome of the New Jersey SCOTUS case. If New Jersey wins, expect the Professional and Amateur Sports Protection Act (PASPA), a federal ban on brick-and-mortar sports betting in 46 states, to be repealed. In that scenario, sports gambling would still be hindered by other federal gambling laws, including the 1961 Wire Act and Unlawful Internet Gambling Enforcement Act (UIGEA).

Current state regulated online gambling options are restricted to online casinos and poker, and only in states that authorize it. The Federal Wire Act is a federal law that prohibits US based sportsbooks from accepting wagers. Even if New Jersey wins and PASPA is repealed, no USA online sports betting options will be available until the Federal Wire Act is dealt with. LoBiondo and Norcross are hoping to circumvent the Supreme Court by tasking Congress with exploring the potential market now, instead of waiting on what will likely turn into a long-winded case. Both lawmakers cite the growing illegal market for sports gambling and how states are missing out on revenue streams and the opportunity to offer comprehensive consumer protection for its residents, something illegal operators cannot do.

This is not LoBiondo’s first effort to introduce legal sports gambling. He, along with Representative Frank Pallone (another democrat out of New Jersey), attempted to introduce legislation into Congress calling for PASPA’s repeal. However, both of their bills failed to make any significant impact. This highlights the federal government’s reluctance to act on this issue, despite its growing presence and popularity.

Billions of dollars are placed in bets throughout the year. If states were properly regulating their own sports betting markets, that revenue could go towards infrastructure, education, etc. LoBiondo, Norcross and Pallone all believe that this should be a non-partisan issue. Instead, it should be one of necessity. Gambling has long been a taboo subject in the United States, but with strong regulatory practices, access to gambling addiction support and educational resources, the US legal gambling market could expand to match the success of that in the United Kingdom, for example.

The New Jersey sports betting case is set to begin in December. Briefs have been flooding into the Supreme Court from both sides, giving them plenty to consider before formal proceedings begin. This is partly why LoBiondo and Norcross acted, because they see the potential of this case taking long to develop. The court will be arguing the constitutional nature of PASPA, which will be a long process in and of itself, so them urging Congress to start their own independent proceedings is a solid back up plan. Only time will tell what happens with the SCOTUS case, but PASPA is only 1/3 of the legal battle when it comes to fully-fledged sports gambling in the US.