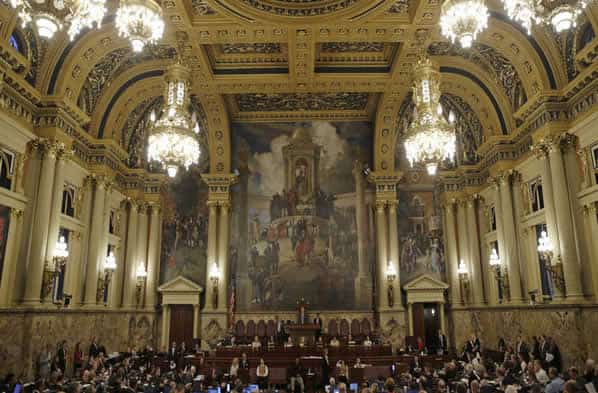 Pennsylvania made an ambitious move by becoming the next state to allow legal online casino and poker gambling. They also have shown they are ready for a legal sports betting framework, as the recently passed legislation includes provision for a locally regulated sports gambling network. While residents can still find legal online betting through United States online gambling, this law supports local brick-and-mortar establishments.

In order for Pennsylvania to fulfill their new legislation regarding sports betting, the federal sports betting ban known as PASPA must be repealed. PASPA was passed in 1992 and affects 46 states, including Pennsylvania, by restricting them from hosting any regulated betting forms. New Jersey is fighting against PASPA’s constitutionality in a US Supreme Court case. If New Jersey wins their case, and PASPA is ruled unconstitutional, then it is highly possible the law will be repealed.

Most legal analysts believe that New Jersey has a pretty good chance of winning. They are up against the NFL, NBA, NHL, MLB and NCAA, who are all arguing that PASPA is constitutional and should be upheld. However, this case has built over some time and some of the leagues have shifted their stance on the matter. For example, NBA Commissioner wrote an op-ed in the New York Times calling for the legalization and regulation of sports betting. He believes it would increase fan engagement and provide revenue for the leagues and states it is offered in. MLB Commissioner Rob Manfred has come out on record stating his league is examining the possibility of legalizing sports wagering. He has even held talks with team owners to gauge their thoughts on the matter. The NHL recently launched a franchise in Las Vegas, the sports gambling capital of the US. Bettors will be able to place wagers on the Golden Knights from inside the stadium and the NHL can’t do anything about it. The NFL also announced its plans to relocate the Oakland Raiders to Las Vegas in the coming years. So, while these leagues are still wrapped up in the lawsuit, it appears they are ready for an environment where legal betting is a reality.

One of the main talking points regarding the whole matter is that sports betting already happens, so why not enforce regulations on it from a domestic standpoint. Americans can find online sports betting that is legal through licensed offshore sportsbooks. However, individual states cannot claim any revenue off these sites because they are licensed offshore. If PASPA is repealed, states like New Jersey that have passed sports gambling legislation will be the first to offer local betting options for their residents.

Pennsylvania is a part of history as one of the first states to formally pass legislation in preparation of a revamped gambling landscape. It will be a long and tedious journey, involving more examination into other laws (like the Federal Wire Act), but Pennsylvania is on the path towards online gambling revolution.