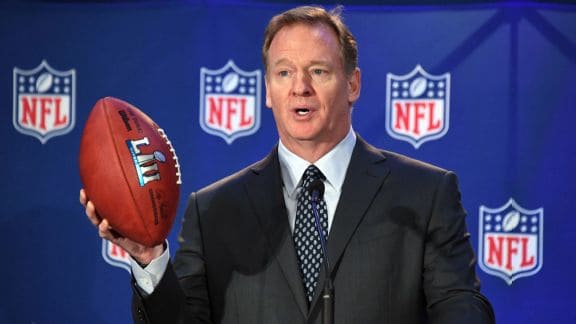 The NFL is a powerful organization—there is simply no denying that. NFL Commissioner Roger Goodell has arguably too much power and has managed to upset players, owners, sponsors, organizations and more. He is often considered the most powerful man in all American sports. Goodell is currently in the news for a dispute between him and outspoken Dallas Cowboys owner Jerry Jones. This dispute could ultimately change the league forever and potentially affect United States online gambling odds as well.

The dispute arose over the Commissioner’s contract restructuring. Goodell is asking for $50 million a year and lifetime access to a private jet. You could make the argument that he deserves his payday, since he has helped grow the league from a $6 billion industry to a $14 billion one since his tenure began in 2006. Goodell came up with the current Personal Conduct Policy that holds players to such high standards. He has also implemented rules to help combat player injuries, especially ones that surface post-retirement. However, these past couple seasons have been his roughest. Television ratings are down, favorability polls are down and sponsorships are down. While many believe the anthem protests are the driving result behind this sharp decline, Goodell made the right call by allowing players to express their rights as citizens. Still, several owners have voiced their disapproval of him. None more so than Jerry Jones.

Jones and Goodell have had a seemingly positive relationship for some time, but the latest news surrounding Ezekiel Elliot has pushed Jones to the brink. Elliot is about to serve a 6-game suspension, the result of a 13-month investigation conducted by the NFL (an example of the league’s power). The case stems from allegations—not charges—of domestic abuse. According to the league’s internal investigation, there was enough evidence to justify a 6-game ban for violating the league’s player conduct policy.

According to reports, Jones was under the impression that nothing would come of this investigation. With the Cowboys touted as potential Super Bowl contenders, it is no surprise that Jones is upset. His star RB cannot play until December. By then, the Cowboys may be out of the postseason picture. After being informed of the news, Jones told Goodell he would go after him with everything he had. His objective is to block his contract from being renewed. Some owners have rallied behind Jones, but the majority believe he is overstepping his boundaries in what has turned into a power struggle.

Part of Goodell’s problem is his inconsistency. It is tough to mitigate legal cases, issues with players, etc., and the league will always impart their own sentencing outside of standard law enforcement. However, it is tough to maintain credibility when you give a player a 6-game suspension for allegations and give another player a 2-game suspension for similar accusations (Ray Rice; case turned out to be different, but it is still worth noting).

Another thing Goodell is inconsistent on is sports betting. He has been opposed to legalizing sports gambling for years, yet authorized the Oakland Raiders to move to Las Vegas, the nation’s gambling capital. Current US federal gambling laws, including PASPA and the Federal Wire Act, block US based sports wagering, but they may be repealed soon and many believe the NFL should back sports betting regulation.

If Goodell loses this battle and is replaced, the league is likely set for a facelift. The fact that this whole thing is playing out publicly does not bode well for the NFL, which is already dealing with controversies. Whether you feel Jones is stepping out of line, the fact remains that he has enough power to make something happen. Only time will tell if Goodell survives this PR nightmare.