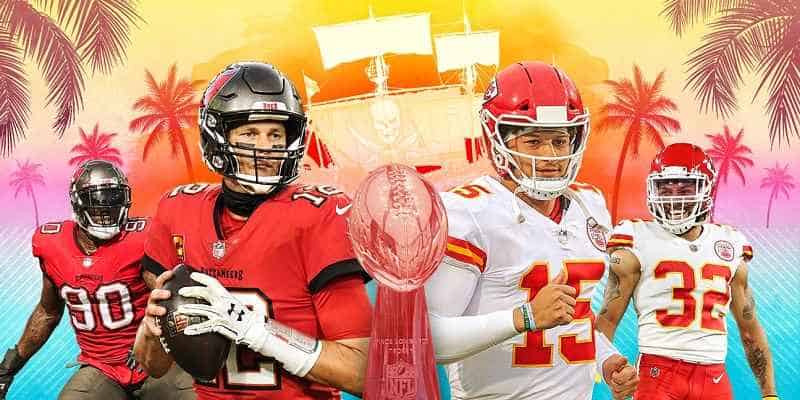 While online casino gaming is the biggest mover and shaker in the entire industry, every now and then, sports betting is thrust into the spotlight.

Yes, sports betting is extremely popular, but it’s a low-margin product for the outlets that offer it.

But once a year, an event rolls around that makes USA sports betting the premier moneymaker not just for players themselves, but for the operators, too.

And that event is called the Super Bowl.

The NFL title game traditionally turns the highest betting handle of any singular sporting event in the world, and that promises to be true again for Super Bowl 55 on Sunday, February 7 (6:30 PM, CBS).

In fact, given the intrigue surrounding the game, it would be a surprise if the contest didn’t set the all-time betting record.

After all, the game features Tom Brady playing in his 10th Super Bowl in 21 seasons, but this time in a Tampa Bay uniform. At 43 years of age, Brady will also be the oldest player to ever take the field for an NFL championship.

Additionally, the Super Bowl is actually being held in Tampa Bay, making this the first time ever that the big game will be played in one of the competing teams’ home stadiums.

On the other side of the ball, the Kansas City Chiefs are looking to become the first team to win back-to-back Super Bowl titles since Brady and the Patriots did it in 2003-2004.

In a sport that seems dominated by dynasties, it’s something of a shock to realize that repeat champions are so rare in the NFL.

In many ways, given that KC QB Patrick Mahomes is the new face of the league (even as Tom Brady is the undisputed GOAT and still seems to be playing at a high level), Super Bowl 55 could be the passing of the torch in a very real way.

Usually, so-called torch passings are metaphorical nonsense, but in this case, it’d be the real deal.

And if Brady beats Mahomes, the torch will simply have to wait for another year or two.

Of course, that’s just the background – that’s just what makes this particular Super Bowl so interesting for those who might otherwise be less interested.

Additionally, it’s what’ll be attracting a number of new US online gamblers to the game – and to sports betting itself – for the very first time.

For them, we’ve put together an assortment of some of the best Super Bowl prop bets and other lines available for the game, as a demonstration of exactly how varied and whimsical Super Bowl betting can get.

These are the most common Super Bowl lines, though they will vary from site to site.

For this reason, we recommend joining multiple US online sports betting sites to shop lines for the best possible values on these kinds of basic wagers.

Statistically, “heads” has a slightly higher chance of hitting than “tails” (if the coin is initially flipped from the “heads” position, which it is).

Don’t be a flippin’ idiot: Always bet on heads if you’re going to wager on the Super Bowl coin flip.

What will be mentioned first during the Super Bowl broadcast?

We think the underdog might be the better pick here, and not just because it has a better payout. Logically, we can see the opener going something like this:

“At 43 years old, Tom Brady is playing in his NFL-record 10th Super Bowl…”

What will Tony Romo say first during the Super Bowl broadcast?

No clue, but “read” seems to be a pretty substantial favorite.

Romo’s great, but we miss John Madden. Somebody get Tony a highlighter!

This is the epitome of total crapshoot. Good luck.

Coach To Have Nostrils Seen First During Game

Who will throw a touchdown first?

Whoever gets the ball first, probably. This really should be a 50-50 shot, so we’re taking Brady because he has a substantially better payout at +110.

Plus, if the Chiefs win the toss, they’ll probably defer, while if Tampa Bay wins it, they’ll likely receive. Thus, Brady is almost certainly going to have the first chance at reaching the endzone.

Who will throw an interception first?

Tom Brady has thrown more interceptions than Patrick Mahomes this season. Statistically, it should be Brady.

Of course, coming off a three-pick NFC Championship game, Brady might be hyperfocused on ball security for Super Bowl 55.

What color will The Weeknd’s jacket be during the Super Bowl halftime show?

Will The Weeknd perform with bandages on his head?

What color of liquid will be poured on the winning coach?

It’s funny that none of the sportsbooks will call this stuff “Gatorade.”

Will the Super Bowl record of 75 combined points scored be broken?

No. Tampa Bay’s defense is too good for that, we think. So is Kansas City’s, for that matter.

Will the Super Bowl record of a 54-yard FG be broken?

Probably not, but it certainly could be. A 54-yarder isn’t a chip shot for a professional kicker, but it’s a full 10 yards shorter than the NFL record.

Will the Super Bowl record of 505 passing yards be broken?

We doubt it. Tom Brady set that particular record in Super Bowl LII, in a losing effort against Nick Foles and the Philadelphia Eagles.

We don’t think either team in Super Bowl LV is going to waste the clock with endless passing attempts.

This thing will be a shootout, but it shouldn’t be a bloodbath.

Will the Super Bowl record of 215 receiving yards be broken?

When these teams met during the regular season (November 29), the Chiefs’ Tyreek Hill finished the game with 13 receptions for 269 yards.

It is wildly unlikely that the Buccaneers will let him even approach those numbers in the Super Bowl.

On the Bucs side, there doesn’t appear to be a single receiver capable of putting up over 200 yards. Plus, Brady spreads the ball around too much for that, anyway.

It’s simple: If the Chiefs win, Mahomes is the MVP. If the Bucs win, Brady’s the MVP.

How many times will “Belichick” be said during the Super Bowl broadcast?

Definitely more than once. This is the safest bet on the boards.

How many times will “Biden” be said during the Super Bowl broadcast?

Ugh. No matter how hard you try, you can’t outrun the taxman.

How many times will “Trump” be said during the Super Bowl broadcast?

Ugh. No matter how hard you try, you can’t outrun the former taxman.

Better yet, dismiss all this political nonsense as irrelevant and save your money for actual Super Bowl bets.

All-time, the Fluff vs. Ruff series is tied at three wins apiece.

Also, since scoring is determined by a hamster running on a wheel (LOLWAT 3.0), there is literally no telling which side will win.

The above wagers just give you a taste of the unusual kinds of bets available in big games like the Super Bowl.

Of course, there are going to be literally hundreds of more relevant lines to choose from, too, like individual player performances, team performances, and pretty much every statistical element you can think of.

All told, you can expect upwards of a thousand different Super Bowl bets to be posted by the top online sportsbooks come Super Bowl Sunday, so you should make sure you get your betting account funded ASAP and give yourself plenty of time to browse the boards and shop lines between sites.

And how much ya got on ’em?