Skip to content
Home » News » Which Teams Will Make The Elite Eight? 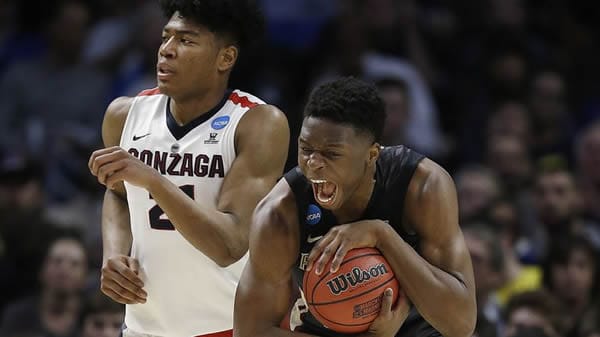 The first set of Sweet 16 matches kept the underdog narrative going. Loyola provided another wild upset against Nashville. FSU kept the pressure on Gonzaga and knocked them out of the tournament. While some thought Texas A&M would smother Michigan in the paint, the Wolverines’ offense was unstoppable and built an insurmountable lead. The remaining 4 games take place tonight and bettors aren’t sure what to expect. Some fans have their favorites to advance reflected in their wagers at US friendly online sportsbooks, though the way this tournament is going it could be anyone’s game.

Kansas may be a powerhouse in the Big 12, but Clemson has shown they deserve to be where they are at. It is tough to predict where this game will go based on how many upsets there have been. However, some key attributes stand out. For one, Kansas runs a fast-paced offense. The slower tempo of Clemson will have to keep up with this pace if there is any sort of chance. On the other hand, Clemson could slow things down and keep Kansas at the pace they want them at. A good note for Kansas is that Clemson is terrible at offensive rebounds, meaning less likelihood of second-chance points. Perhaps Kansas’s biggest threat is from behind the arc. Couple their 3-point shooting with Clemson’s poor 3-point defense and you have a recipe for success. We expect Kansas to push through and come out of this one alive. Kansas are -5 point favorites to win.

West Virginia has a tough opponent in Villanova. Their defensive style brings an aggressive press, but Villanova can accommodate with their 3-point shooting ability. So, the Wildcats can use West Virginia’s defensive strategy against them. The Mountaineers may adjust their defense, but that would leave Nova open to drive through the lane. This game will ultimately come down to West Virginia’s defense and how they handle things. They are one of the top-ranked defenses in the country. Villanova, one of 2 #1 seeded teams left, is still favored to win.

If Syracuse beats Duke, expect all hell to break loose. The Blue Devils have had an easy route to the this point and got lucky again with an #11 seed matchup. They have multiple players putting up high numbers consistently. Syracuse’s run is impressive given their roster, but Duke has everything in place to advance and there is not much the Orange can do about it. Duke is heavily favored to win by at least 11 points. Both teams play a zone defense, meaning both know how to penetrate it. Bet on the Blue Devils to make it through over the Orange.

The Texas Tech-Purdue matchup is interesting because of how close the teams are with seed rankings. Purdue has an edge and is favored by most oddsmakers. Texas Tech has had close wins in both rounds, whereas Purdue managed to get through despite missing a key player in C Isaac Haas. Purdue lost an important aspect of their offense, but they have persevered in considerable fashion. Haas may play again since the engineering department of the school is working on a brace, but there are no guarantees. Still, we see Purdue advancing.

If you are looking to bet on these March Madness games, consider using licensed offshore sportsbooks. These sites have lines on each game as well as props. Your bracket may be busted, but that doesn’t mean you have to stop betting.