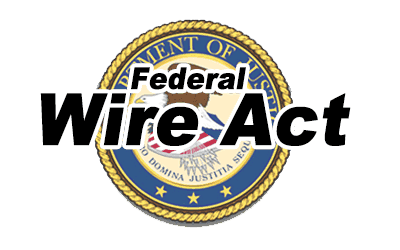 The new opinion stated all interstate wagering, gaming information sharing, and electronic communications relating to gaming would be prohibited. The DOJ issued the new opinion January of 2019 and provided a 90-day grace period for operators in the US gaming industry to comply.

However, the 90-day grace period was further extended after several US states filed formal complaints about the effects of this sudden new policy on their current legal operations and domestic offerings. States like New Jersey, Pennsylvania, and New Hampshire challenged the opinion reversal, but judges ruled that NH could be the only plaintiff, but other states could enter the case as amici curiae and provide supporting evidence and testimonies.

The primary issue states have with the new opinion is the attack on current interstate online operations, (future online gambling operations for Pennsylvania) and the increased cost of moving all data facilities, servers, etc. in-state even for gaming options like lotteries, video gaming machines, tribal-owned venues, and more.

Some states which legalized betting chose to partner with more experienced entities which were either outside of their state or overseas. The new DOJ opinion would effectively interrupt such operations and partnerships which functioned legally in the market before the Justice Department’s change of heart.

Many in the public suspect that casino mogul Sheldon Adelson is behind the recent change of policy in the DOJ. Adelson has long opposed online gambling, seeing it as a threat to his land-based casinos – he even created an anti-gambling group called the Coalition to Stop Internet Gambling. Adelson is considered one of President Donald Trump’s donors, particularly during his campaign and some of those suspicions regard this change in policy as a pay-back to Adelson.

After NH brought forth the case against the DOJ’s new Wire Act opinion, the Coalition to Stop Internet Gambling and the National Association of Convenience Stores sought to become defendants in the lawsuit. The groups filed a motion to intervene on Thursday, May 23rd, 2019. However, they aren’t the only ones to trying to defend their case as New Jersey filed an FOIA (Freedom of Information Act) request against the DOJ to see information which could link Adelson’s lobbyists, his Coalition, and the DOJ’s opinion reversal.

The Department of Justice has yet to turn over any documentation or communication files regarding NJ’s request. The DOJ also refused NH’s request to answer important questions on the Wire Act’s language, and recent interpretation came to be.

Besides the current court case between NH and the DOJ, the Department is set on making its new opinion effective in June despite the new opinion uncertainty of what may or may not be technically allowed.

And that, in turn, raises another complexity: The DOJ had already announced that the new opinion goes into effect in June 14th, 2019, despite the Department unwilling to state precisely what might or might not be legal under the opinion reversal. Judges have asked the Department to at least clarify the new opinion reversal’s stance on multi-state associated lotteries and online lottery sales.

However, New Jersey is refusing to let the DOJ slip by. The state’s Attorney General Gurbir Grewal is filing a lawsuit against the Department for violating the FOIA since the department has failed to provide answers to the state. NJ AG Grewal wrote in a press statement, “Online gaming is an important part of New Jersey’s economy, and the residents of New Jersey deserve to know why the Justice Department is threatening to come after an industry we legalized years ago. It’s especially important that we figure out whether this federal crackdown is the result of a lobbying campaign by a single individual seeking to protect his personal business interests.”

There is significant evidence that Sheldon Adelson was involved in attempting to ban online gambling from proposing RAWA through paid for politicians to dumping thousands into lobbying groups, and millions into Republican party campaigns which he hoped would back his anti-online gambling plan.

After the DOJ opinion reversal, the Wall Street Journal suggested in a published article stating that the new opinion is nearly identical to one a Adelson-backed lobbyist sent the DOJ a few years before. The Washington Post had the specific lobbyist confirm that the Wire Act reversal looked a lot like the proposal he penned himself. Nicole Navas Oxman, a spokeswoman for the DOJ, stated otherwise, “The 23-page opinion reflects the Office of Legal Counsel’s best judgment of the law, and the accusation that the opinion was shaped by any outside interest is baseless and offensive.”

However, Charles Cooper, a Washington Attorney who worked as part of an Adelson-backed lobbying team, confirmed that the reversed opinion memo released by the DOJ’s Office of Legal Counsel echoed his arguments made in 2017. Cooper was once the head of the Justice Department’s Office of Legal Counsel and in an interview confirmed that the newly released reversed opinion “accords entirely with the analysis my firm undertook and I shared with the DOJ.”

Adelson’s Coalition To Stop Internet Gambling has spent years and millions fighting online gambling, attempting to implement RAWA, lobbying the government, and buying politicians which would back his ideas.

Adelson and his company, the Las Vegas Sands spent $280,000 lobbying the US Federal Government in the first quarter of this year. The Adelsons, Sheldon Adelson and his wife, contributed $122.3 million during the 2018 midterms and in 2016, gave over $20 million in the final weeks of the election into Future45, a super PAC which backed Trump with critical advertising in swing states.

Adelson’s ties to Trump’s election campaign run deep. The casino billionaire and his wife Miriam donated $500,000 to a fund to help pay for legal fees incurred by aides to Trump who were drawn into the Russia investigation according to tax records. One month later, President Trump awarded Adelson’s wife with the Presidential Medal of Freedom considered the highest honor for a civilian.

Sheldon Adelson has promised to “spend whatever it takes” to ban online gambling, a medium of gaming he believes is in direct competition to his business. Adelson is an avid White House visitor for Trump, often over for dinner with the President. We speculate that most of these meetings were to discuss how Trump could repay Adelson for his generous donations by fulfilling the casino owner’s desire to block online gaming.

The DOJ will likely be able to implement the opinion reversal as a new US gambling law come mid-June, but the hope is that states will have a strong enough case to reverse the soon-to-be in effect law.

California Tribes Meet Requirement To Get Sports Betting On 2022 Ballot

June 2, 2021 Comments Off on California Tribes Meet Requirement To Get Sports Betting On 2022 Ballot

May 18, 2021 Comments Off on Online Betting Scrapped As FL Gambling Expansion Nears Ratification

Warren Buffett Hates Gambling, But He’d Like To Sell You Some Stock

May 4, 2021 Comments Off on Warren Buffett Hates Gambling, But He’d Like To Sell You Some Stock