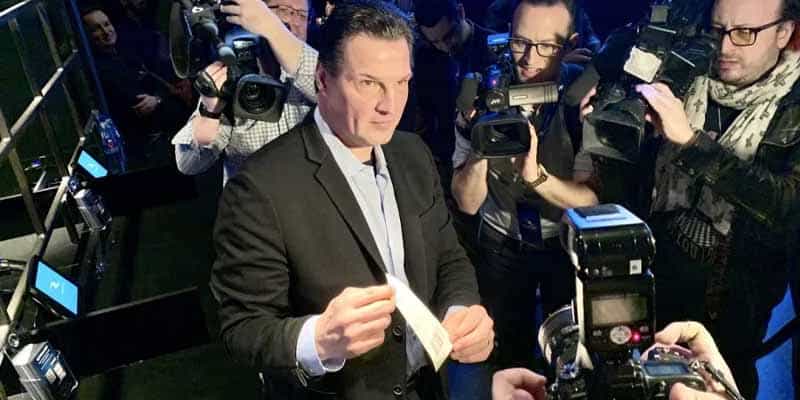 Rivers Casino in Des Plaines accepted the ceremonial first bet from Chicago Blackhawks announcer Eddie Olczyk, who placed a $100 wager on the Chicago White Sox to win the American League pennant at 16/1 odds.

“I’m a Cubs fan, but you’ve got to bet with your brain instead of your heart,” said the former NHL center.

With his wager at BetRivers Sportsbook on Monday, Illinois became the 15th state to offer legal sports betting in the United States.

More casinos and racetracks are expected to have their sportsbook operator’s licenses approved by the Illinois Gaming Board in the coming days ahead of the 2020 NCAA men’s basketball tournament.

March Madness is the second most profitable sporting event of the year for bookmakers, with only the Super Bowl drawing a bigger handle annually.

Sports wagering was included in the expansion of Illinois online gambling law signed by the governor in the summer of 2019. However, even though in-person betting is now available, online and mobile sportsbooks are not permitted to launch in Illinois for at least 18 months, with the timer starting on March 9.

Only allowing sports wagers to be placed at brick-and-mortar establishments for a year drew criticisms from the U.S. gambling industry when the expansion became law and came under fire again this week due to the growing fears over COVID-19, the coronavirus outbreak that’s now topped 1,000 confirmed cases and killed 32 people in the United States.

According to the Chicago Tribune, the casino executives, regulators, and politicians attending Olcyzk’s ceremonial wager tempered their excitement due to growing concerns from the coronavirus causing Wall Street to have its worst day since 2008.

“We’ll get through this virus,” said Neil Bluhm, the head of Rush Street Gaming, which runs Rivers Casino. “The market may go down, but ultimately it’s going to go up.”

Bluhm admitted the coronavirus may have a negative impact on the projected profits for the sportsbook but said Rivers Casino has beaten much longer odds before, referencing how they receive a casino license in Illinois during the Great Recession.

“When we were awarded this license, things were a lot worse,” Bluhm said. “At the end of 2008, we were inches away from being in a depression.”

Rivers Casino spokesman Patrick Skarr said they are taking nothing for granted and have placed warning signs from the Centers for Disease Control and Prevention at the facility and have cleaning crews working around the clock to sanitize everything in the casino.

“There are cleaning personnel on duty around the clock, cleaning the equipment and surfaces,” Skarr said. “We have alcohol-based sanitizing stations throughout the facility for our team members and guests.”

With Illinois sportsbooks not allowed to accept wagers over the Internet, residents are forced to place a risky bet on their lives if they choose to venture to a crowded casino during the coronavirus outbreak.

The CDC strongly recommends avoiding large public gatherings at this time, and even conservative estimates project it may be several months before everything can begin to return to normal.

Scientists say a coronavirus vaccine may not be ready for at least 18 months — just in time for Illinois to roll out online and mobile sports gambling.

Bluhm is confident the brick-and-mortar BetRivers Sportsbook will eventually find success but added the company is not taking anything for granted in regards to the coronavirus.

“This is an unusual virus,” Bluhm said, who is 82 years old. “It isn’t that lethal, except for older people. That’s why I’m shaking hands with my elbow.”