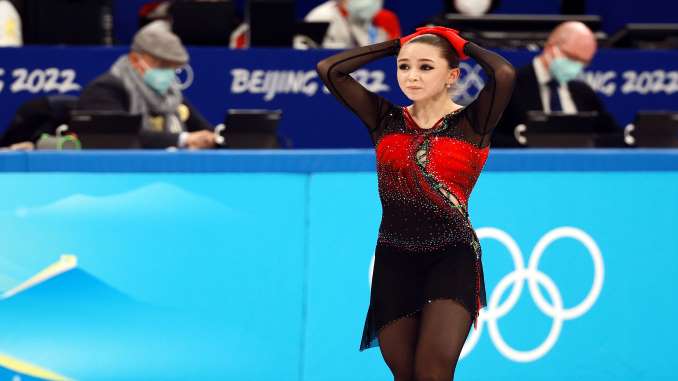 What started as a groundbreaking performance by 15-year-old Kamila Valieva has now spiraled into an international doping scandal. And for those that placed legal online bets on the event, the whole ordeal is extremely confusing.

On Monday, Valieva participated in the team figure skating event for Russia. That day, she secured a gold medal for the Russian Olympic Committee (ROC) and made history by debuting a brand new move.

But soon after becoming the first woman to complete a quadruple jump at the Olympics, reports broke that Valieva had previously tested positive for a heart drug banned by the International Olympic Committee (IOC).

Russia has already been banned from the Olympics for repeated doping offenses. Because of the ban, Russian athletes must compete under the ROC without paying tribute to the country’s flag or anthem.

With the rate at which these Russian doping scandals roll out, it almost seems like an Olympic tradition. It usually goes like this: Russia sends a competitor, a positive test result is revealed, medals are revoked, and team rankings are adjusted.

However, the case of Kamila Valieva requires an additional level of examination and deliberation because she is a minor. According to the World Anti-Doping Agency, competitors under the age of 16 cannot be held liable for instances of doping.

Despite an appearance at training earlier today, there has been no word as to whether Valieva or the ROC will face penalties.

And while this may affect the future of the ROC, that isn’t our priority here at USGO. What we want to know is how this event affects Olympic betting payouts.

Last summer, over 20 million Americans were presumed to have set wagers during the Tokyo Olympic Games. With several states having debuted or expanded their online sports betting operations since then, participation in the Winter Games is projected to be even greater.

Sportsbooks Caught In The Mess

Considering that Valieva and her team were the fan-favorites for this event, it is safe to say that both in-person and mobile sportsbooks collected a handful of wagers betting on the ROC.

For those whose bets are still caught up with the bookie, here are the two most plausible outcomes:

The resolution will vary by the sportsbook. For the IOC, this is a legal issue that could take several months to work out.

But it begs the question of whether these scenarios will become more frequent. Unless you’re placing a futures bet, it is unlikely that you planned to have any money locked up in the event.

Still, that’s a risk bettors take with any wager set.