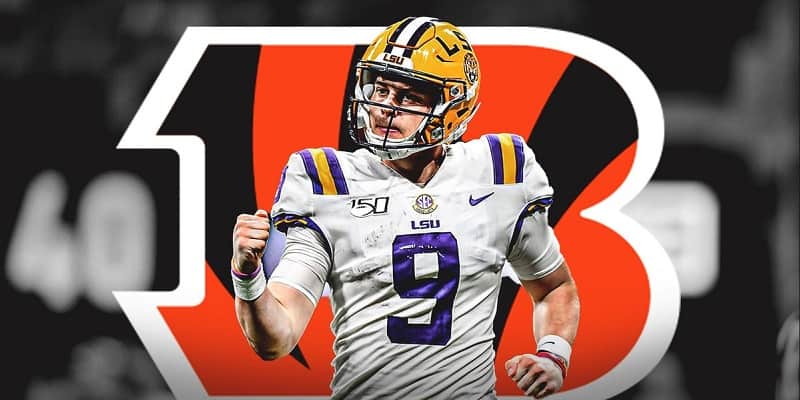 The virtual 2020 NFL Draft kicks off tonight from remote locations after the league, and commissioner Roger Goodell called an audible amid the coronavirus pandemic, moving to an online-only format for the three-day event initially taking place in the new home of the Raiders franchise and next to the best sportsbooks and casinos in Las Vegas, Nevada.

NFL Network, ESPN, and ABC will all carry the live broadcast and stream for all seven rounds and 255 selections from the best football talent in this year’s class, which will begin at 8:00 PM ET on April 23 and conclude on April 25.

Vegas oddsmakers have hundreds of NFL Draft prop bets available for tonight’s event, and leading US mobile betting apps currently have live odds posted on which players will be selected among the first round’s 32 picks.

Joe Burrow, the Heisman Trophy and national championship-winning quarterback from Louisiana State, is heavily favored at -100000 to be the first overall pick in the 2020 NFL Draft by the Cincinnati Bengals.

Burrow -100000 means a substantial $100,000 bet would only win $100 and indicates there is an extremely high chance the legendary Bayou Bengal is selected to become the Tiger King of Cincinnati’s jungle this fall.

However, even though it appears Joe Burrow is a lock for tonight’s top pick, Vegas doesn’t seem to believe it will have much of an impact on the Cincinnati Bengals odds to win Super Bowl LV in 2021.

The Bengals are currently listed at +15000 on draft day, according to Nevada online sportsbooks. In terms of gambling odds, a modest wager of $100 would win back the initial bet plus a whopping $15,000 if Burrow and Ohio’s litter of big cats lift the Lombardi Trophy in Tampa Bay on February 7, 2021.

To put the Bengals chances in perspective: +15000 mirrors the Super Bowl 55 odds for both the Jacksonville Jaguars and Washington Redskins — the three NFL teams who are least likely to win it all next season.

As of April 23, Vegas handicappers and oddsmakers favor the Kansas City Chiefs to win back-to-back titles at +550, meaning a $100 bet would payout $550.